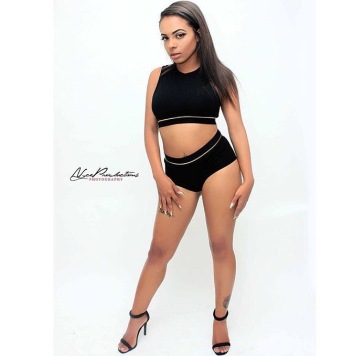 Hips N’ Lips had the opportunity of meeting 5kay through their very first periscope video. We were discussing relationships and at the time Kay was trying to get over some hurts  from her past. Her Ten Toes Rap challenge via instagram gain her 1.1 million views and boosted her following rapidly. 5kay bodied the challenge speaking out against date rape. We were drawn to her because she was just like us in our younger days. 5kay don’t take no s*** and she always on her grind. She is confident and ready to take on the world in her own way! A high school senior, she’s already accomplished so much. She’s a model, founder of her promo team Angels of Atlanta, and future recording artist.  I was hyped to finally sit down and chop it up with this young Boss. 5kay moves to her own beat, she’s ready to kill the game and take names! Check it out!

5kay: I’m reppin’ the southside of Atlanta! Born and raised!!

Hips N’Lips :At this very moment, what are some of the things you’re working on?

5kay: Right now,  I have the  rap challenges trending  on instagram.I’m in the studio a lot. I’m looking to put out my first mixtape soon so I just been focused on getting as much time in the studio as I can.

Hips N’ Lips:You have your own Promo Team, Angels of Atlanta. What’s going on with the promo team?

5kay: Basically, I got about 15 girls on the team and they are from all over Atlanta. We get booked to promote teen clubs and parties. We show love and get paid for promoting.

Hips N’ Lips:  Besides going to the studio and promoting is there anything else you’d like people to know about?

5kay: I have my own line of cosmetics coming, Kay Cosmetics. I want to focus on my music and gain a larger following before I introduce the line though.

Hips N’ Lips: You’re following is CRAZY already though. How did you gain such a huge following on social media?

5kay: Well, my ten toes challenge helped skyrocket my followers. Before I think I was around 15K and after I posted the challenge I went up over 30k. Most of my initial followers  were just people from the Southside.

Hips N’ Lips: So would you say that everybody from the Southside is loyal with their support of new talent coming out? Does the Southside ride for each other?

5kay: There’s always slight beef here and there but for the most part  people from the Southside we ride for each other. We show support for each other and we can grind together.

Hips N’ Lips: Who are some of the people from the Southside that you gotta show love to?

5kay:  Let me see, definitely my  little sister Miss Mulatto (winner of Jermaine Dupri’s Rap Game). She has always stayed consistent in this game so she always get mad love.

Hips N’ Lips: Have you and Miss Mulatto done any music together yet? Who are some artists you’d like to work with?

5kay: After the knuck if you buck challenge I wasn’t going to do anymore for real but I seen one video of the ten toes and the beat just grabbed me. I was like I’m just gone kill it because people always had so much to say about me but they really didn’t know me like that. So I was like I’m just gone tell as much as I can in this  little 30 seconds. It was like to shut people up. I found out that I wasn’t the only one that went through something like that. I had people from out of the country foolin with me. After I spoke on it, it was like a release. I started wanting to talk more about date rape. It happens and that’s why I want to be an activist for date rape. The support made me feel good and the truth was out!

Hips N’ Lips: How do you deal with your Haters?

5kay:  Me personally, I just became used to people talking. Everything people would say about me I had already heard it. I been called a hoe before.  That’s nothing new. If people can find something else to say then maybe I’ll entertain but like I said I heard it all. I been dealing with that way before instagram and all that.

Hips N’ Lips: I always say people can say what they want but until they know you’re story they don’t got a clue who you are.

5kay: I don’t judge nobody because I don’t know what nobody do behind closed doors. It’s alot of females that have a reason they act a certain way, I can’t judge nobody. I have a passion for young girls. I can relate to things they may go through.

Hips N’ Lips: Kay,what would you say to your generation about adults being judgemental.

5kay: Try to always be respectful to my parents and elders because they have your best interests at heart but they aint always going to understand you. Most parents don’t. It’s cool to have people like yall (Hips N’ Lips) to talk to because it’s easy to keep it real and get  some sound advice from someone other than your parents.

Hips N’ Lips: That’s what it’s all about! We just want our youth to understand that they have people out here that will support them. We have made mistakes too and mistakes are a part of life but we can keep it real and try to steer our young people away from making mistakes that will cost them their life.

Before we end, Is there anything else you would like to let the readers know?

5kay: MIXTAPE COMING SOON!! BE ON THE LOOKOUT!! 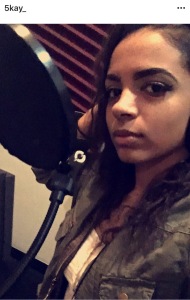